Cover variants: It's All Rather Complicated

For years, there have been slight variations in comic-book covers. For instance, from the 1960's until relatively recently there have been price variants, where the standard US dollar price has been replaced with a UK pence figure. In 1986, DC Comics produced the first collector-orientated variant cover, the first to feature different artwork, when they re-launched Superman in John Byrne's six-issue series Man of Steel. Each issue of the series shipped with two different covers, both by Byrne and printed in equal quantities. As many collectors bought at least one copy of each cover, sales on the series broke records. The genie was out of the bottle. Publishers soon realized that putting multiple covers around the same interiors was a very good way of squeezing more revenue out of a shrinking market. In 1991, Marvel Comics pushed the idea further than before with their re-launch of the X-men series. Issue one shipped with five different covers, the last of which featured a massive fold-out that combined all the previous four into one huge image. Soon after that, Gen 13 #13 shipped with a near-idiotic thirteen different covers! Luckily, the norm for variant covers settled into the Man of Steel model, with two covers in equal quantities so no one cover was rarer than the other. Marvel Comics also ran a 'two-on-two' scheme for a while, with the second issue of their new titles carrying two covers. More recently, we've seen the introduction of the quantity variant. With these, retailers can get comics with specially-produced covers that differ from the standard issue. These copies have a smaller print run and are thus rarer and command a premium price. To be able to order them they have to buy a qualifying amount of the vanilla comic. So, for example, to get a 1-in-10 variant they have to buy 10 copies of the standard cover; for 1-in-25 they must buy 25 standard copies, and so on through to the 1-in-500 - and higher - levels that are offered on certain titles.

HOW DO YOU TELL WHICH VERSION YOU'RE BUYING?

Well, we try to keep it as simple as possible. Here's how it works...
If you see a comic described as Cover A, Cover B or similar, that comic will be an equal quantity variant: there will have been the same amount printed of each cover and none is rarer than the other. However, if the comic is described as 1-in-10, 1-in-25 or similar, that comic will be a quantity variant, printed in the listed ratio.
Just to complicate things further, some comics sell well enough to exhaust their initial print run, and so receive a second printing. These second (or more) printings often carry a different cover image, or sometimes simply have a variation of the publisher's trade dress. We list these as Second Printing, Third Printing, etc, and we include an accurate image of the cover so you can see exactly which version it is. Please note, though, that all of our items are first printings unless specifically stated to be otherwise. 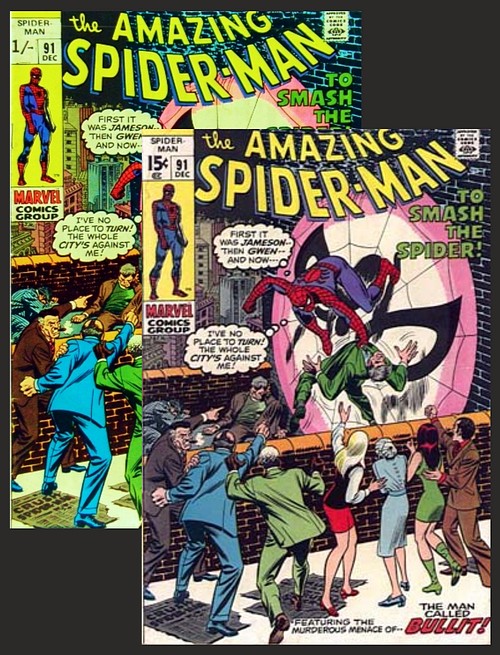 The older and thankfully far less contrived UK Price Variant was created to service a genuine need within the market, and is always a great deal rarer than its US cents cover price counterpart.
From the early 1960's until the mid-1980's, many original American comic books were distributed in the UK through sweet shops and newsagents. In order that the UK retailers would know what to charge for them, the publishers produced copies with prices in UK pence. These variant copies were printed at the same time, on the same presses, with the same paper and the same ink as all the cents-priced copies. The only difference was that at some point in the print run, the US cents cover price was changed to UK pence for those copies intended to be shipped to the UK. In addition, the cover month is often removed as well. This seems to be to avoid the comics appearing out of date when they arrived in the UK around a month or so after they hit the stands in the US. In those days shipping really did involve a ship! The exact quantity produced of these variants isn't known: however, considering the relative sizes of the US and UK comic book markets it's unlikely that UK Price variants would make up more than 10% of the entire print run.

By around 1982, most publishers had realized that the UK was a major market for their comics and had started putting both US and UK prices on their covers. Before then, many US comics were sold in Britain with over-stamped cover prices. This took the form of a rubber stamp impression with the UK price, somewhere on the cover. This was done to enable newsagents to know what to sell them for.
Usually these impressions took the form of a small round stamp with the UK price within, sometimes alongside the letters T&P (Thorpe & Porter, the company which imported the comics). As these stamps are part of the original distribution process they are not considered detrimental to the comics' grade. As an aside, there is sometimes an arrival date written in pencil on a comic's cover. This was again for the convenience of the newsagents who could use the arrival date as a guide to a comic's shelf life. These arrival dates have no impact on a comic's grade.

A QUICK WORD ABOUT COVER IMAGES

Every comic offered for sale on this web site displays an accurate cover scan of the item in question.
However, please note that this is a library scan, and is for reference purposes only. It is NOT a scan of the actual item. We provide a detailed grade description for all items, and would recommend you refer to our standard grade definitions to ensure you're entirely happy with what you are ordering. We use library scans purely to solve the logistical challenges of offering hundreds of thousands of items for sale. With 30 years plus experience, we've found this method works very well, but if you have any questions about an item's grade we'll happily answer them. Just drop us an email and we'll get back to you.